The story As the artist told me1 , for her masterpiece (diploma work) she believed she ‘had to make a statue.’ ‘So I made one of Eve crawling on all fours, escaping from Paradise (in a combination of styles: Romanesque mixed with Modernist). This work was important for me. When the Master2 first caught sight of the work in progress, he was startled, but tried to improve it. He made it bonier, a bit more angular. I thought I had gotten away with it, and went on modelling. But later, three weeks before the exam, he told me we wouldn’t cast it. This meant that the sculpture was unacceptable. I took my grandmother’s chopper and cut the clay off the frame. I only had two weeks left, so I quickly made a second sculpture, a sitting figure that was appropriate in all respects.’

The question: what was it about the first artwork that the master found so embarrassing – irritating, even? Why couldn’t he (and the rest of the staff) tolerate an expressive sculpture with character?
In the context of Hungarian sculpture in the sixties, its style (in a narrow formalistic sense) shouldn’t have been objectionable.
Moreover, the students had been given no explicit directions as to what sort of sculptures their masterpieces should be.

The answer: I guess what really made the Master blow a gasket can be found in the Academy’s collective subconscious. This reductive modernist work (with a pinch of romanesque reminiscence) was not simply an abstracted figure. It was (unadmittedly, of course) a representation of a very slim, peaky, humiliated yet wilful woman.

A woman on all fours is not just reminiscent of, but is the very pathosformel of sexually subjugated woman figures. As Griselda Pollock pointed out3 in her interpretation of van Gogh’s Peasant Woman Stooping, Seen from behind (1885), this is not only a sex position; it brings to mind the archetypal animal existence – and all the things it’s associated with, such as the ground, instinct and telluric fertility. Also, in her discussion of how the genius painter Jackson Pollock had made his abstract expressionist drip-paintings, Rosalind Krauss4 emphasised the significance of the difference between living, perceiving and working vertically and doing the same horizontally (“looking or smelling”).

However, this sculpted woman throws back her head, which suggests that her will has not been broken. Her mask-like face is hard, and denotes not only exhaustion, but also anger and defiance. The title (Eve’s flight from Paradise) reveals the artist’s intention: this figure is escaping the place that has tortured her. It is obviously not Paradise for her, although it may be for someone else. She refuses the Paradise of patriarchy.

If Várnagy had followed the traditional iconographical scheme of Expulsion with Adam and Eve, it would not have been less problematic, for it could have been read as a criticism of the political regime of the time. However, her tortured Eve is escaping on her own, which lends the work a message that is valid even today.

And why did they accept the second sculpture?
Because it is a trivial, dull representation of the “good girl”: a sexy woman with round breasts, who naively and readily offers herself. Stylistically, it bears a strong resemblance to the works of popular ceramic artist and sculptor Margit Kovács, a woman herself.
Várnagy’s Sitting woman – unlike her Eve – is no threat to a misogynist society.

[2] József Somogyi, who was one of the most accepted sculptors of the time.

[3] ’Griselda Pollock, ‘The ambivalence of the maternal body. Re/drawing Van Gogh,’ in Differencing the Canon. Feminist Desire and the Writing of Art’s Histories (New York and London: Routledge, 1999), 41–63. 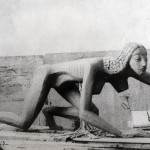 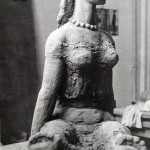